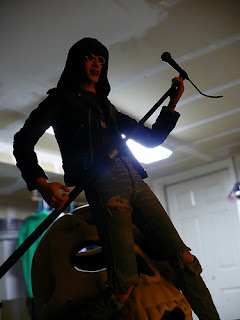 The legenary, punk-rock group, THE RAMONES will be receiving a Life-Time Achievement Award at the Grammys this year. With, three of the original four founding members now deceased.....[Johnny Ramones,Joey Ramones and Dee Dee Ramones].... glad it's happening this year.. This celebrated punk-rock band  came out of NYC in the 70's and influenced many U.S and U.K bands that followed.. They dis-banded in 1996. Their very best known songs are.... 'Sheena Is A Punk Rocker',  'Pet Semetary' and 'Blitzreig Bop'.
This is the group's first Grammy award.
Also, receiving life-time achievement awards this year are Dolly Parden and Julie Andrews. Jan
----------------------
Photo 'Joey Ramones',  by daveparker cc
----------------------
Found this video on YOUTUBE of THE RAMONES doing 'Blitzreig Bop'. Posted by BlankTV