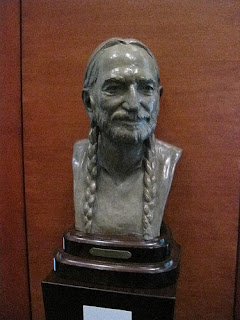 I just read online, that Willie Nelson 77 and Harry Chapin are both being inducted into the Grammy Hall of Fame this year,they are joined by 30 other recording artists. That's just plain cool, isn't it? 'On The Road Again', written/recorded by Nelson over 30 years ago is being inducted. The song has already earned Willie a Grammy.
AND, Harry Chapin, one of my [Jan] favorite artists of long ago, is being honored for his beautiful, very meaningful song 'Cat's In The Cradle'. YAY!
Since 1973, over 900 recordings have been honored and recognized in the Grammy Hall of Fame. Willie Nelson has been honored three times before. This is the first time for Harry Chapin.
In previous years, other great musicians like...Janis Joplin, Bob Dylan, Jerry Lee Lewis., Marvin Gaye, Billy Joel have been honored.
The Grammy's are held on February 13th 2011. Jan
-----------------------
Photo by alamosbasement  cc
-----------------------
Found 'On The Road Again' by Willie Nelson on Youtube. Posted by quantummechanic90