Bob Dylan...'Isn't It Time To Hang Up Your Harmonica?'...Jan's Opinion 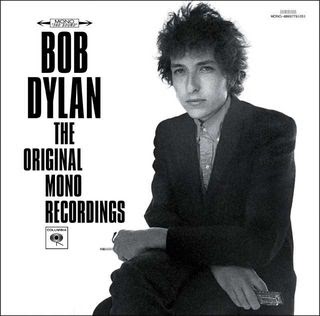 Well, I just got done reading..."Wall Street Jounal To Bob Dylan...Isn't It Time To Hang Up Your Harmonica?" by LA TIMES writer, Patrick Goldstein
Go HERE.  A very interesting read, by the way.
I [Jan] just have to put my two cents in....being the BIG Bob Dylan fan, that I am.
First, Mr. Goldstein brought up some very good  points, and when he said, "Dylan lives to confound his fans". Next: Jan's opinion...'yes he does AND he's suppose to sound like that...after all, he's Bob Dylan, ain't he? And, what's the matter with being 69 years old...anyway? Who says 'Being Old And Being Cool Don't Mix ?...Bob Dylan Will Always Be Cool. I agree with everything that Patrick Goldstein says too.' That is all... end of lecture. Thank you. Jan.
----------
Photo: Bob Dylan on the cover of a new box set featuring his first eight albums in their original monorual mixes. Credit: Sony / Legacy Recordings....from above link @ L.A. Times. Thank you. Jan
----------
BOB DYLAN 'Like A Rolling Stone' Video...Found on Youtube.
----------