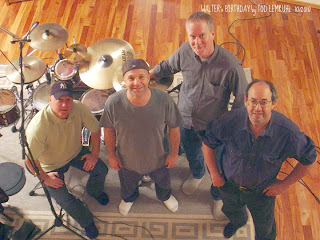 I do not walk much, or use my arms...recovering from M.S. So, all day, everyday, I sit at the computer and create stuff...it's my life and art. Keep my brain active, it's what my teacher told me to do. And, I love that I can do this. Sometimes I get a little too excited about posting for other people's tastes. Whoops. I understand. I'm still learning.
Last Saturday night, our van JUST made it home from Steve's gig....the battery we thought. On Sunday, Steve headed out in the van to see his family. [I have trouble getting in the van, and stayed home]. He had changed the battery and thought all was well. BUT, by Tenino, [15 miles] our van was having problems and Steve called me...he's turning around, coming back to Yelm and going to NAPA auto store. Said, he'd call me. He's good about calling too.
Well, about 2 1/2 hours later I noticed...NO STEVE...No call either. It was now dark...where was he? It's Sunday...the auto parts store could be closed.
I called long-time friend, JON BARONI/keys/vocals/ WALTER's BIRTHDAY. Not home. Then, I called TOD LEMKUHL/guitar/vocals/WALTER's BIRTHDAY...he was kind and reassured me that Steve would be home soon. I waited awhile and tried not to worry.... before calling SCOTT ERCOLIANI/drums/WALTER's BIRTHDAY, I re-called JON and JULIE BARONI. Jon answered. He too thought Steve could be stuck between Tenino and Yelm. AND, Jon instantly dropped what he was doing, jumped into his truck and went to Tenino, ready to help my Steve. Julie called me and told me everything would be alright. OK...Now, you know, Jon and Julie Baroni are treasures. They are caring and kind folks too....THANK YOU so much, you guys.

Well, Steve called alittle later, was under our van with a flashlight in his teeth...changing the alternater in the auto store parking lot..WOW! What a guy. It took him over 4 hours to do the job. He thought he had said he'd call when it was done.
Just thought everyone would like to know...these guys from the band WALTER's BIRTHDAY ARE great, not just music-wize. Jan
------------
Photo by Tod Lemkuhl/WALTER's BIRTHDAY. 10/2010, while recording CD. From left...sitting JON BARONI/keys/vocals, SCOTT ERCOLIANI/drums, TOD LEMKUHL/guitar/vocals and my STEVE BARTLETT/on bass.
Posted by T. Jan Rose , Web Manager at 1:01 PM