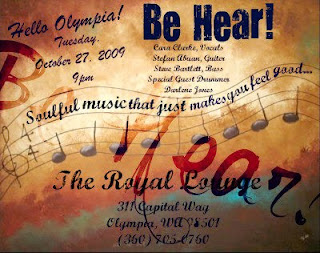 From Cara Clarke on FACEBOOK.
Cara W. Clarke Hello Olympia! Mark your calenders for Tuesday, October 27,2009 for "Be Hear!" at the Royal Lounge...Soulful Music That Just Makes YOU feel good...
From Shameka's Site on FACEBOOK.
Press
"Press" is playing a show at The Royal on Capitol Blvd. We are playin with the amazing band "BE Hear". The show starts at 8pm on Oct 27th. This will be our last show for a while. "Press" is working on some new material, ...& recording! Come dressed up in your Halloween best! xoxoxoxo ~ Press
Artwork by Cara Clarke.