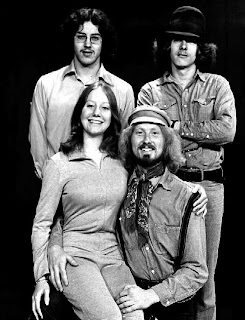 New photo posted on PNW Bands for Bartlett, taken in 1971. Bartlett is 20 years old[in back with glasses] in this photo. Taken in Seattle Washington.
From the site. "The original Good Blessing was formed and named by Mike Jamboretz and Larry Taverner. They performed in coffee houses until King Radio discovered them at a festival at the University of Washington. King Radio auditioned Larry and Mike for the summer gig. The producer wanted to add a female vocalist to the duo. Linda Helland was part of that audition and was added to the duo that day. Steve Bartlett joined the group prior to the first performance. The final version of the group lasted a few months. "
Go to PNWBANDS here
http://pnwbands.com/goodblessing.html
Photo from the site.
Posted by T. Jan Rose , Web Manager at 4:13 PM