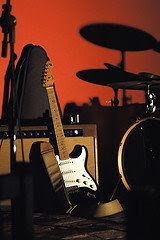 guitar blues by Rodrigo Moraes. From WIKIPEDIA...
"Rosetta Tharpe (March 20, 1915 – October 9, 1973) was a pioneering Gospel singer, songwriter and recording artist who attained great popularity in the 1930s and 1940s with a unique mixture of spiritual lyrics and early rock accompaniment. She became the first great recording star of Gospel music in the late 1930s and also became known as the "original soul sister" of recorded music.
Willing to cross the line between sacred and secular by performing her inspirational music of 'light' in the 'darkness' of the nightclubs and concert halls with big bands behind her, her witty, idiosyncratic style also left a lasting mark on more conventional gospel artists, such as Ira Tucker, Sr., of the Dixie Hummingbirds. While she offended some conservative churchgoers with her forays into the world of pop music, she never left gospel music." Go to...http://en.wikipedia.org/wiki/Sister_Rosetta_Tharpe
Listen to an early Sister Rosetta Tharpe in the video posted below in 'Four Or Five Times'.
Posted by T. Jan Rose , Web Manager at 2:16 PM