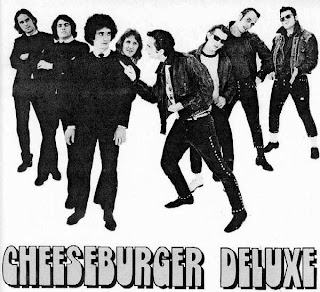 From 1972 to 1975, Bartlett was in a Seattle-based band named 'Cheeseburger Deluxe'. He was one of the creators of the band in 1972
What a fun band and very popular too. The members acted out characters as well as performed 50s music. Bartlett was 'Dink Dugger'--[his mom owned the P.A....so, the band had to let him play]. WOW.
Bartlett left the band in 1975, Steve Barth replacing him. The name of the band was changed to 'Thunder Road', but the renamed 'Cheeseburger Deluxe' did not last and was disbanded in 1976. Go to ... http://pnwbands.com/cheeseburger.html
Photo from PACIFIC NORTHWEST BANDS above link.
Posted by T. Jan Rose , Web Manager at 2:39 PM