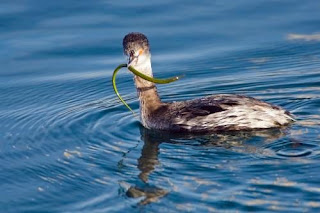 The snake pipefish is a seahorse-like creature that can grow up to 18 inches in length. The bony, rigid fish provides poor nutritional value for adult birds and can actually kill chicks that choke on the bodies. Yet terns, puffins, and other seabirds are increasingly turning to the fish for food as the populations of other fish continue to decline.
The spread of the pipefish has confused many marine biologists. They were almost never seen in 2002, then rarely seen the next year. Since then surveys and local divers report seeing hundreds of the fish in local waters. Mike Harris of the Center for Ecology and Hydrology (CEH) in Edinburgh said: “Since [2003] the species has increased dramatically in abundance and its spread continues. Indeed it may be accelerating. In June last year, 500 were caught in a 15-minute haul off the Farne Islands, while in July and August large catches were recorded in the Norwegian Sea, for example.” From this interesting article. Go here for more---
http://www.environmentalgraffiti.com/ecology/starving-sea-birds-turn-to-junk-food-fish/800
Posted by T. Jan Rose , Web Manager at 10:55 AM