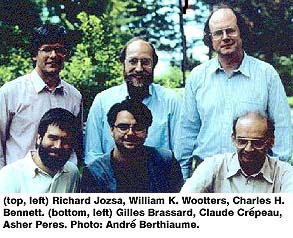 Teleportation is the name given by science fiction writers to the feat of making an object or person disintegrate in one place while a perfect replica appears somewhere else. How this is accomplished is usually not explained in detail, but the general idea seems to be that the original object is scanned in such a way as to extract all the information from it, then this information is transmitted to the receiving location and used to construct the replica, not necessarily from the actual material of the original, but perhaps from atoms of the same kinds, arranged in exactly the same pattern as the original. A teleportation machine would be like a fax machine, except that it would work on 3-dimensional objects as well as documents, it would produce an exact copy rather than an approximate facsimile, and it would destroy the original in the process of scanning it. A few science fiction writers consider teleporters that preserve the original, and the plot gets complicated when the original and teleported versions of the same person meet; but the more common kind of teleporter destroys the original, functioning as a super transportation device, not as a perfect replicator of souls and bodies. To read it all, go to ---
http://www.research.ibm.com/quantuminfo/teleportation/