It has been described as the world's largest rubbish dump, or the Pacific plastic soup, and it is starting to alarm scientists. It is a vast area of plastic debris and other flotsam drifting in the northern Pacific Ocean, held there by swirling ocean currents.
Discovered in 1997 by American sailor Charles Moore, what is also called the great Pacific garbage patch is now alarming some with its ever-growing size and possible impact on human health. For the whole article-Go to--- 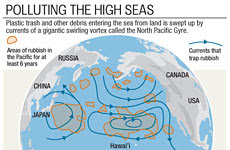