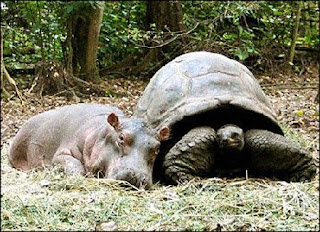 A baby hippopotamus that survived the tsunami waves on the Kenyan coast has formed a strong bond with a giant male century-old tortoise in an animal facility in the port city of Mombassa , officials said The hippopotamus, nicknamed Owen and weighing about 300 kilograms (650 pounds), was swept down Sabaki River into the Indian Ocean, then forced back to shore when tsunami waves struck the Kenyan coast on December 26, before wildlife rangers rescued him. Go here---
http://www.floristone.com/hippopotamus-tortoise.html
Posted by T. Jan Rose , Web Manager at 2:06 PM