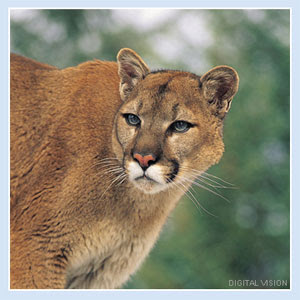 Commonly called mountain lions and pumas, cougars are typically considered to be numerous in the West. However, they have been eliminated from about 50 percent of that territory and as much as two-thirds of the North American range. Historically ranging from Chile to British Columbia and east to the Atlantic seaboard, the cougar has been virtually eliminated east of the Mississippi, and its fate in the West is threatened by increasing habitat loss and fragmentation. Cougars in Texas, the northern Rockies and southern California have disappeared from much of their former range. Click here to read more---
http://www.nwf.org/cats/catsWest.cfm
Posted by T. Jan Rose , Web Manager at 9:55 AM