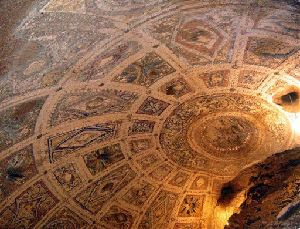 orshiped by ancient Romans as the site where a wolf nursed the infant twins Romulus and Remus, who later founded the city. The cave, called the Lupercale, was found underground in an unexplored site near the palace of Augustus. "You can imagine our amazement, we almost screamed," says the head of the archaeological team. • Excavating the site will be difficult, because the cave is two-thirds filled with debris, reports Reuters. "We have to investigate with extreme caution," says an archaeologist. "This is a precious thing which is certainly more than 2,000 years old." The colorful cave is 52 feet beneath the surface, where restoration work on the palace continues. Go to---
http://www.newser.com/story/12171.html
Posted by T. Jan Rose , Web Manager at 9:49 AM