BEFORE AND AFTER PHOTOS--Before: Before any excavations were undertaken, Temple I at Tikal in Guatemala was covered with brush and trees, as seen here in a photograph from 1957. Tikal, a city that boasted a population of perhaps 100,000, flourished in the years AD 300-900. Like the ancient Egyptians, the Maya buried their kings under pyramids like this one. These pyramid temples were regarded as sacred mountains --"wits" -- in the native Mayan language. After :This picture shows Temple I at Tikal after excavation and partial restoration. Temple I is a monument to the ruler Hasaw Chan, which he built during his reign around 700 AD, and which stands 145 feet tall. His burial chamber was discovered at the base of Temple I. Click here to learn more. 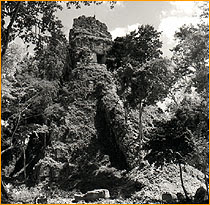