An undated NASA handout photograph of Mars taken by the Mars Explorer Spirit shows what seems to be a figure striding across the surface of the planet. The image was taken from panoramic images taken by Spirit November 6-9, 2007. 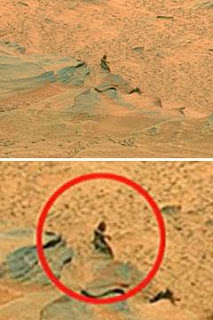 It turns out, it's just a rock. In his blog, MSNBC.com science editor Alan Boyle quotes Cornell astronomer Jim Bell, who heads the scientific team behind the Mars rovers' panoramic cameras. "It's a funky little bizarre wind-carved rock formation," Bell said. "It's not unusual at all." Bell has apparently become very familiar with the image, having received dozens of calls from reporters asking about what some describe as a mermaid or Bigfoot. Go here to read it all---
http://www.king5.com/topstories/stories/NW_012408NAB_nasa_mars_picture_person_JM.53454bc1.html
Thanks to Kleiners Korner for this story. Click here for Kleiners Korner www.kleinerskorner.com/
Posted by T. Jan Rose , Web Manager at 2:20 PM