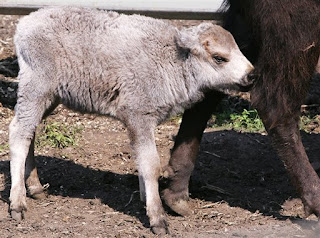 By EMILY FREDRIXAssociated Press WriterMILWAUKEE (AP) - A farm in Wisconsin is quickly becoming hallowed ground for American Indians with the birth of its third white buffalo, an animal considered sacred by many tribes for its potential to bring good fortune and peace."We took one look at it and I can't repeat what I thought but I thought, 'Here we go again,'" said owner Dave Heider.Thousands of people stopped by Heider's Janesville farm after the birth of the first white buffalo, a female named Miracle who died in 2004 at the age of 10. The second was born in 1996 but died after three days.Heider said he discovered the third white buffalo, a newborn male, after a storm in late August.Over the weekend, about 50 American Indians held a drum ceremony to honor the calf, which has yet to be named. Go here the all the story. Thank you Linda. http://adishakti.org/_/3rd_rare_white_buffalo_born_on_wisconsin_farm.htm