Man With No Legs-Too Abled to Compete? 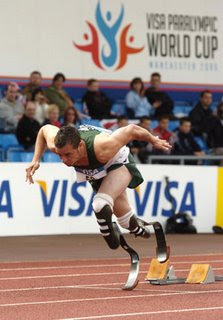 Oscar Pistorius, (November 22, 1986) is a South African Paralympic runner. Known as the “Blade Runner” and “the fastest man on no legs”, Pistorius is the double amputee world record holder in the 100, 200 and 400 metres events and runs with the aid of carbon fibre transtibial artificial limbs.
Pistorius was given permission to compete with regular athletes in June this year, and ultimately hopes to compete at either the Beijing or the London Olympics.
However, the International Association of Athletics Federation (IAAF) has serious concerns that his artificial legs might actually give him an unfair advantage. The federation has been using various cameras to study Pistorius’ running motion and want to get him into the lab for further analysis. Thank you Linda for this story.
Posted by T. Jan Rose , Web Manager at 10:40 AM