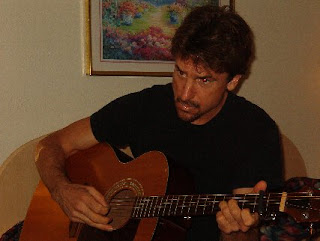 Perhaps better know for years for his part in the early Grunge scene in his hometown of Seattle, Russell Bartlett has crossed untold music boundaries since the days of pay-to-play gigs in the same rainy moshes that spawned Soundgarden, Mudhoney, Mother Love Bone, Pearl Jam, Nirvana, etc, etc. Bartlett, who grew from the same beginnings (not to mention stages) as, say, Chris Cornell and Mark Lanegan, is considered by some to be among the finest songwriters of his ilk--whatever that is--in his adopted home country of Texas, from where he has been based since 1995. We plan to see Russ on New Year's up in the Everett Area. Go here to find out more about Russ Bartlett and hear his Tunes.
http://www.russellbartlett.com/music.html I know they're available at http://www.cdbaby.com/ too.
Russell Bartlett News from his Web Site. Dated Sept. 2007. Russ is currently in the studio in Austin, TX working on tracks for the new CD, "Dark Horse," scheduled for release in early 2008. "The Texas Years," a complilation of previously released songs, will be released by Gas Town Records in November 2007. Russ will hit the road October, followed by a European tour later in 2008. Please check back for dates! To keep an eye on Russ, go to www.russellbartlett.com/
Posted by T. Jan Rose , Web Manager at 12:52 PM