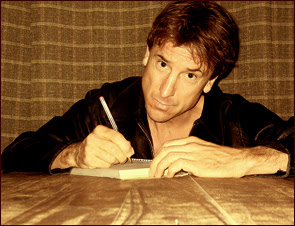 Critically acclaimed lyricist and country blues story teller, Russell Bartlett was originally a singer in Seattle's Grunge scene of the late 80s. He relocated to Austin, Texas in early 90s, and has released five studio CDs with the tiny Republic-of-Texas label. Bartlett's command of the language and turn-of-phrase wit is reminiscent and of Townes Van Zandt, Mickey Newbury and Billy Joe Shaver--all of whom he sites as influences. "A songwriter's songwriter's songwriter," Bartlett has developed a faithful audience in Europe, as well as in the U.S. Southwest. "Texas Smells," just released but recorded mostly in 2004, is a tribute to the culture and cuisine of his adopted Lone Star state. The disc already has critics drawing comparisons to his 1998 classic "One Hand on the Plow." Bartlett saw Russ last week end and Russ is thinking of moving back to the Pacific Northwest! YEA!! 'Texas Smells' is available at www.cdbabys.com
Posted by T. Jan Rose , Web Manager at 11:26 AM